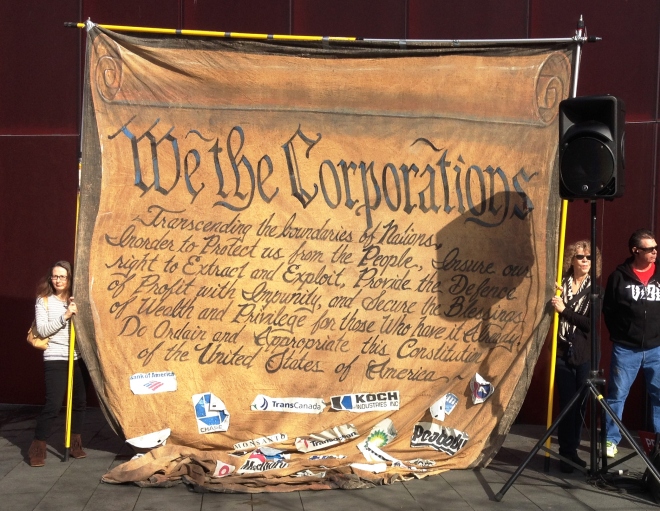 Image: Protest sign at a Seattle TPP protest event in March, 2015. Found in the following article by Signe Predmore, “Seattle mulls stance against fast track for Trans-Pacific Partnershiphttp,” on the Seattle Globalist blog:

//www.seattleglobalist.com/2015/03/28/seattle-mulls-stance-against-fast-track-for-trans-pacific-partnership/35335     Photo credit given by Predmore to the Washington Fair Trade Coalition. If anybody knows who painted that amazing sign, I’d be glad to add that information here, too. Update: I just received a Facebook message about the likely source of the banner in the photo. Here it is: “I believe that the “We the Corporations” banner in the photo is a product of The Backbone Campaign out of Vashon, WA, near Seattle. It would be really great if you could give them credit, since they are doing a lot of good for several issues and deserve the recognition and attention. Here’s how to get in contact with them: http://www.backbonecampaign.org/”

Three days before the inauguration of John F. Kennedy, in January of 1961, a relatively rational, moderate Republican U.S. President, Dwight Eisenhower, gave a very gracious and insightful farewell speech. That speech is more and more frequently recalled and quoted these days, mainly due to the following prescient warning which it contains:

“In the councils of government, we must guard against the acquisition of unwarranted influence, whether sought or unsought, by the military-industrial complex. The potential for the disastrous rise of misplaced power exists and will persist. We must never let the weight of this combination endanger our liberties or democratic processes. We should take nothing for granted. Only an alert and knowledgeable citizenry can compel the proper meshing of the huge industrial and military machinery of defense with our peaceful methods and goals, so that security and liberty may prosper together.”

The former general had nothing against the military, but, during that era of the rapidly-expanding arms race, he could foresee a potentially disastrous circumstance in which all of the numerous industries associated with equipping the military—the manufacturers of not only weapons and their parts, but also petroleum-based fuels and every sort of material object necessary for supplying the rapidly-multiplying number of military personnel with their professional tools and life needs—could manipulate and exploit the  increased militarization and arms race for the purpose of expanding their profits and power. Twenty years later, a different kind of Republican President, Ronald Reagan (not him alone, by any means—he had a lot of “help” and encouragement), opened the floodgates through deregulation of big business for Eisenhower’s worst nightmares to be realized. Thirty years of deregulated, laissez-faire capitalism, including tax reductions for the wealthiest Americans, tax breaks and enabled tax evasions for corporations, and the completely unjustified declaration by the Supreme Court that corporations are the same as “persons” and have the same rights under the law, combined with the normalization of endless undeclared wars, has brought us to a point right now in which we are already way beyond the level of “acquisition of unwarranted influence” which Eisenhower warned us of. The purchase and control of the U.S. and all other major governments by the corporations and the potential for complete deregulation of markets and industry is at this moment poised to become our reality through three proposed international trade agreements: the TPP (Trans-Pacific Partnership of 12 Pacific area nations), the TTIP (Transatlantic Trade and Investment Partnership of 29 nations: the European Union and the U.S. ), and the TISA (Trade in Services Agreement, 50 nations worldwide, so far).

The recently-published, previously secret, details of the TPP reveal some extremely alarming proposals that, if approved and implemented, could violate three sections of the U.S. Constitution, prevent the United States and other TPP partner nations from regulating commerce within their own national boundaries (including labor laws, environmental regulations, tax rates, and more), and enable an extreme acceleration of the processes already at work that are creating climate collapse, economic collapse, and mass extinctions of potentially all living species, including our own.

The TPP clearly violates Article III and potentially the 1st and 13th Amendments of the U.S. Constitution, primarily through provisions in chapter 28 of this 30-chapter document. The device described in that chapter, and in several other recently passed and proposed international trade agreements, which enables those constitutional violations and many other harmful and potentially disastrous outcomes is called an ISDS, or Investor-State Dispute Settlement. The ISDS protects partner nations to this trade agreement from any national or local laws and courts that might “nullify or impair….a benefit it could reasonably have expected to accrue” (profits) through trade with another TTP partner nation.  The TPP, TTIP, TISA and other international trade agreements all have these ISDS components which violate Article III by forcing such cases to only be heard through a 3-person international arbitration panel, to be chosen by the trade agreement member nations, and which can, and most likely would, consist of lawyers for the same industries involved in the disputes. Under that arrangement, it would be possible for foreign and domestic corporations doing business in the U.S. or any partner nation to ignore and violate minimum wage and other labor laws, environmental protections, trade tariffs, and anything else that they can interpret as “nullifying or impairing” their ability to make profits. That is a direct violation of Article III, section 2 of the U.S. Constitution because that article extends the judicial power of the courts of the U.S. to include settling disputes between “citizens thereof and foreign states, citizens, or subjects.” These ISDS provisions can even violate the 13th Amendment, which forbids slavery, if just two of the three arbiters (whose individual votes are protected with anonymity) decide to allow a company to bring their unpaid laborers onto U.S. soil to work on a disputed TPP-protected project. Other provisions of the TPP violate the First Amendment (freedom of speech), by extreme extensions of copyright law which could severely limit speech on the internet, take away our right to expose or publicize facts about the activities or atrocities in which these trade partners might engage, and allow pharmaceutical companies to arbitrarily drive up prices on medicines.

The members of our House and Senate are sworn to “support and defend the Constitution of the United States against all enemies, foreign and domestic.” Are not our congresspersons therefore bound by their oaths of office to vote against the TPP? The stickler might be whether or not there is any need to prove that corporations who act in certain ways have made themselves enemies of the United States, rather than protected “citizens.” It seems to me that taking the jobs of U.S. citizens away and replacing them with sweat shop and slave laborers overseas would qualify for making them our enemies, along with creating the climate crisis, lying about that and trying to cover it up, and a host of other despicable acts. How can any Americans, or the citizens of any of the other partner nations to these trade deals, tolerate this attack on their sovereignty and laws by both foreign and domestic corporations?

The TPP, TTIP and TISA can enable corporations to preside over, and effectively replace the governments of all nations, and make unregulated, ultra-exploitative capitalism the primary ruling force over the whole world—except, of course, for Mother Nature, who will ultimately have the last, emphatic, earth-shaking word. This horrific nightmare can only happen if we allow it to. The U.S. Congress is expected to vote on the TPP sometime this year, which, considering the trends toward secrecy, deceit and avoidance of public input, could mean any time. We, the people, must bring all of the voice and power of our civic responsibility that we have left to gain the attention of our so-called representatives and everybody that we can reach to expose and arrest this unacceptable, unconscionable plan. If we follow Ike’s advice and fulfill our role as “an alert and knowledgeable citizenry” we might be able to make sure that this monstrous trade deal, and all others like it, are voted down and never implemented.